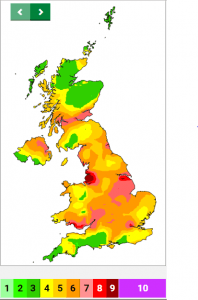 While we have been seeing early onset of spring and and enjoying an unusually warm February, there are some worrying issues at hand too.

On Tuesday, UK residents were warned to restrict outdoor activities because of an increase in pollution in many areas in the country. Our warm weather is due to the air-mass from North Africa, which has also brought Saharan dust. This combined with vehicular and industrial emissions, as well as particles from Europe have all contributed to the increase in countrywide pollution levels.

The Environmental Department, Met Office and the National Weather Service have all warned that the levels will be highest in North England, including in Leeds, Liverpool and Manchester. Meanwhile, air quality in London was close to that of New Delhi, according to the app AirVisual prompting the Mayor’s office to issue alerts. All of these warnings have continued into Wednesday, 27th February, 2019 and is expected to last until Thursday. According to a study by the Royal College of Physicians, approximately 40,000 premature deaths are linked to air pollution.

The increase in pollution levels across the country just goes on to show the failure to bring pollution levels down. While the government has asked 36 of the top polluted cities to submit pollution curbing plans, many have missed the deadlines to do so. Since, 2010, UK’s pollution levels have been high due to nitrogen oxide pollution from diesel vehicles. Bringing it down requires instituting a pollution tax or bringing down the number of diesel vehicles. Effort to do either of these have been very slow due to impacts on local businesses and communities. The government has earmarked an implementation fund of £275m and a £220m clean air fund to minimise local impacts. However, extensive and concrete steps need to be taken immediately to bring down pollution levels, or the country is like to see even more pollution linked deaths and impacts on health.